Stranger Things Actor David Harbour explains that the filming the upcoming Hellboy reboot is the hardest job he’s done so far, especially the stunts and the everyday make-up. During an interview with Collider, he said:

“It was the hardest shoot I’ve ever done, primarily because there are just so many stunts in it,”Harbour said. “It’s a very action-packed movie. There’s a lot of story, too, and a lot of big scenes, but there’s a lot of action. There’s a lot of me running around, jumping and turning, and punching stuff. It’s crazy! I’m 42, and the fact that no one asked me to do this in my 20s is so insulting. Why did I have to become a super-monster in my 40s?! My bones are not the same as they used to be.” 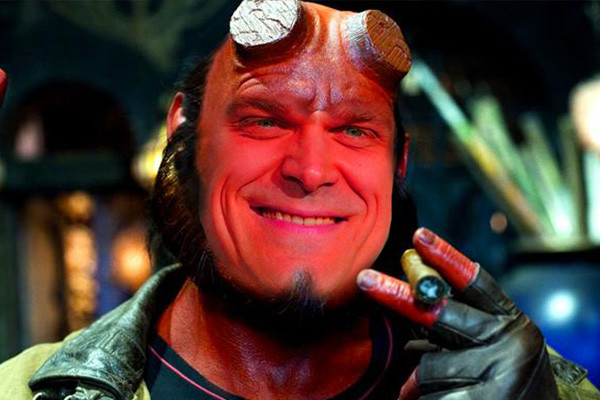 “It was very hard, in that way, but it’s also really thrilling ‘cause I get to carve out an entirely new mythos to this guy and I get to play on this big palette of witches and giants and demons,” he explained. “To me, it’s very Shakespearean. I grew up doing regional Shakespeare and when Hamlet sees the ghost of his father, there’s something about that that you don’t really do in film anymore. We rarely see an indie film where you have an emotional pathos where somebody sees a ghost. This is a palette where you can have demons and ghosts and big creatures and things that are epic, in that way. That was super fun!”

“In terms of the make-up, that was not that fun. I will say that I got to a weird place with it. I think we had 70-plus applications of make-up, which is a full mask. By day 30 or 35, I’d wake up in the morning and look at myself in the mirror and everything was blurry. And then, I’d sit in the chair and for an hour and a half or two hours, they’d apply that face. Then, I’d look back up in the mirror and be like, “Oh, there I am!” I started to associate my own image with that other face. That was pretty cool! I didn’t really like my own face, as much as I liked this guy’s face, so I’d get excited in the morning when I’d put on the different face, but it was hard. There was a lot of listening to music on headphones and a lot of sleeping, if you could with four people applying glue to your face. As hard as acting can get, and it really does get hard with 15-hour days of jumping around and hurting yourself and going without lunch and having to be in make-up for three hours, the one thing that I do remember is that there are people that have to do jobs that are far worse. For three hours, I’m in a weird uncomfortable position where people put glue on my face, but it’s what I love to do and the fact that I get to do it leaves me with a bunch of gratitude.”